In 2020, the Polish power sector was impacted in the short term by the COVID-19 pandemic and the actions taken by the Polish government and other governments to mitigate its health effects (including lockdowns, mobility restrictions, etc., and the resulting changes in energy supply and demand). The impact of the pandemic was felt especially in the spring of 2020 - after that, its impact on the economy in general and the power system in particular declined. In the short term, market trends (energy, energy raw materials and technology prices) and regulatory amendments affecting the framework where PSE operates play an important role - and will continue to do so. In the medium to long term, technological trends related to the decarbonization of the sector will play a fundamental role in the evolution of the power system and its environment. The renewable energy, energy storage, and electromobility sectors have grown strongly over the past year. The process of testing and introducing new metering technologies that provide opportunities for the use of high frequency and accuracy demand data (HFD) was also underway. In the longer term, hydrogen technologies may become important.
Key trends

Our response to global trends and changes in the environment

In order to adapt the NPS to the new shape of markets and new technologies, PSE has consistently engaged in new technology development and cybersecurity collaboration across the entire power industry. We actively participate in the preparation of new market solutions to ensure the integration of the European electricity market, including through the development and implementation of standardized market mechanisms and products required by European regulations. An example of such activities is the involvement of our organization in the design and development of capacity allocation methods based on Market Coupling and Flow-Basedmethodologies. Another example is the involvement in the process of establishing European platforms, such as the common allocation platform for long-term transmission rights and the European platforms for balancing energy exchange.
We take part in the implementation of modern solutions. Our activities involve participation in the development of competitive mechanisms of the electricity market in Poland and the European Union and cover the following market segments:

We are an active participant in innovative research projects. We engage in efforts to develop solutions to actually implement new technologies to the market and to the power system, including:

Integration of the Polish market with European markets

SDAC
In the context of the planned process of integration of national electricity markets, the most important implementation activities are focused on the implementation of a common market in terms of day-ahead and intra-day markets. We actively participate in all processes related to the implementation of Market Coupling on all Polish cross-border interconnections, with particular emphasis on synchronous connections.
The central segment of the European electricity market model is to be a Day-Ahead Market based on the Market Coupling (MC) process, with a trading gate at 12:00 p.m. This is a mechanism whereby exchange prices for each market area in Europe are to be determined in a coordinated manner, in a common process, and with a single calculation point. Transmission capacity allocation is to be based on the price differential between market areas. It is therefore an implicit auction model, i.e. combining trading of transmission rights and electricity. Market participants do not book transmission capacities to execute their cross-border transactions, but only to buy/sell energy in the market to which they are geographically assigned (in some simplification). The allocation of capacity by the MC mechanism takes place automatically when energy is traded, in a way that maximizes the total market surplus. A graphic illustration of Market Coupling can be found below. 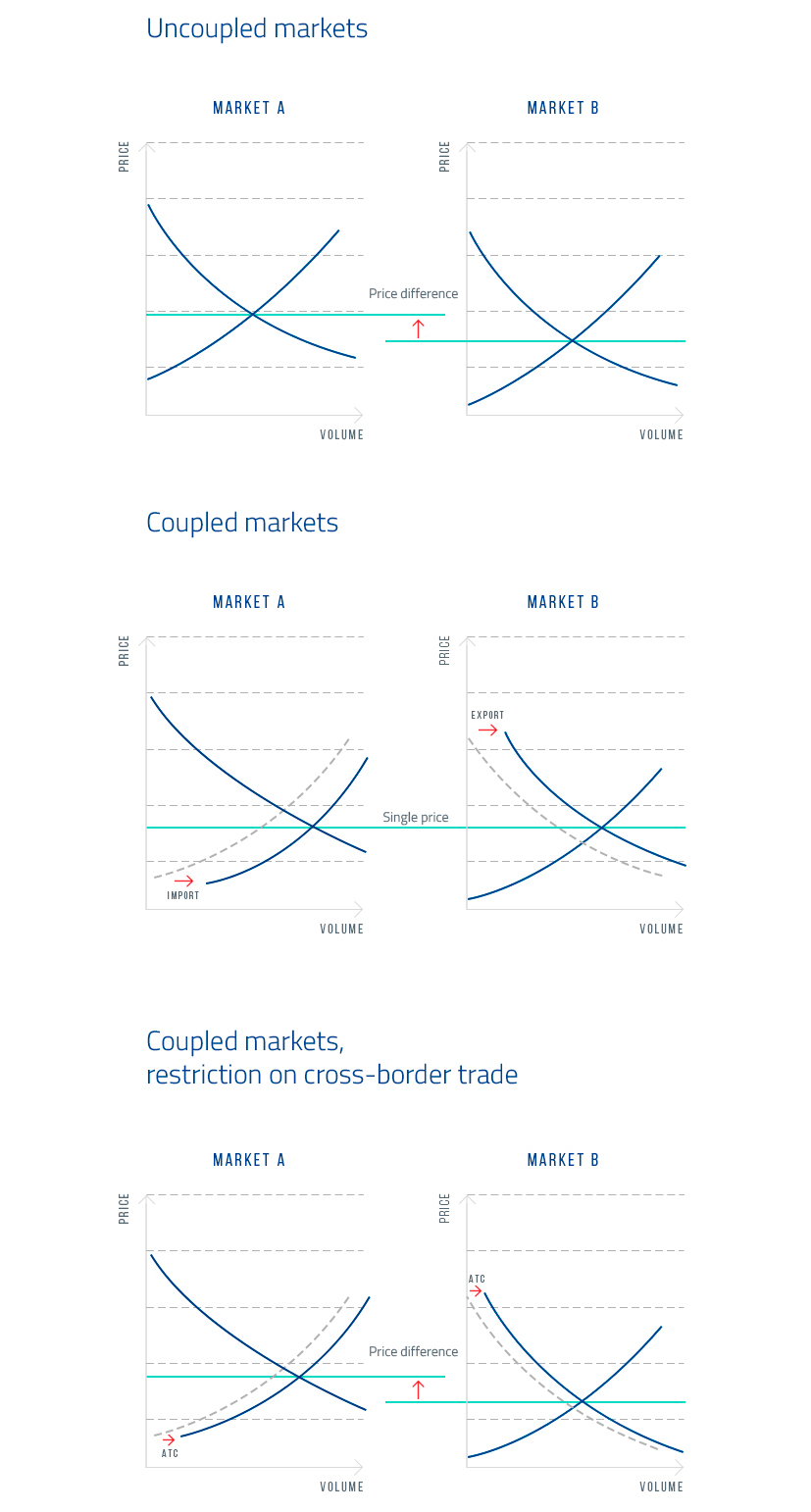 The implementation of the European Market Coupling takes place through regional projects, which are then combined into a pan-European project. These projects include:

On June 17, 2021, the Interim Market Coupling project was launched operationally. The project connected the day-ahead capacity markets in Poland and 4M MC countries (Czech Republic, Slovakia, Hungary, Romania) with Europe's largest MRC market by introducing implicit capacity allocation on six borders (PL-DE, PL-CZ, PL-SK, CZ-DE, CZ-AT, HU-AT). The Interim MC project did not introduce any changes to the manner of determination of inter-area transmission capacities, which are still determined by the TSO using the NTC (Net Transfer Capacity) method, but changed their allocation method. The implementation of the Interim MC project led to the implementation of Single Day-Ahead Coupling almost across Europe. This implies the introduction of a single common auction on the power exchanges for market participants in all countries covered by the MRC and 4M MC areas as part of the day-ahead market coupling mechanism. Thanks to the Interim MC project, Poland is fully integrated in the European mechanism for day-ahead market coupling.
Price Coupling of Regions Initiative
Price Coupling of Regions (PCR) is an initiative of European power exchanges to create a single market coupling solution for electricity pricing across Europe and the allocation of cross-border day-ahead capacity. Such an integrated European electricity market is expected to provide increased liquidity and efficiency of trade and increased social welfare.
The power exchange initiative originally included day-ahead markets in: Austria, Belgium, Czech Republic, Denmark, Estonia, Finland, France, Germany, Italy, Latvia, Lithuania, Luxembourg, Netherlands, Norway, Portugal, Spain, Sweden, Switzerland and United Kingdom. The initiative itself was established in 2009 and the PCR parties signed a cooperation agreement in June 2012. It is open to other European power exchanges that want to join. In 2016, the Polish Power Exchange joined the PCR.
PCR is based on three main principles:

SIDC
The operational joining of the Polish market area to the Single Intra-Day Coupling (SIDC) mechanism took place on November 19, 2019. Thus, the obligation set out in the CACM Regulation (Commission Regulation (EU) 2015/1222 of July 24, 2015 laying down guidelines for capacity allocation and congestion management) to implement a solution for the uniform coupling of intra-day markets (in terms of the Intra-Day Market) with European reach has been fulfilled.

Activities currently underway are intended to ensure proper operational performance and proper development of the SIDC. These activities include initiatives with a European reach. In parallel, local initiatives are underway with the primary goal of expanding SIDC's reach into additional market areas. 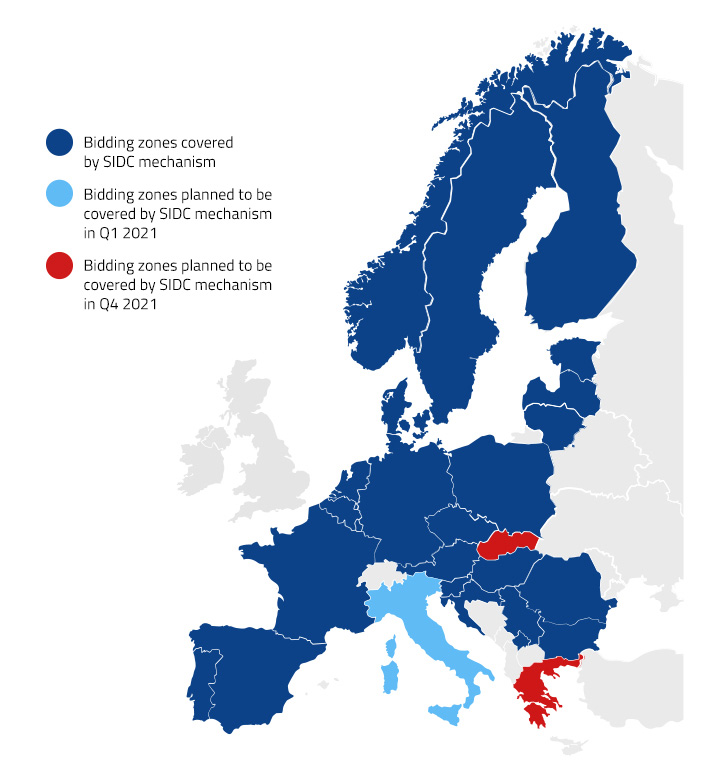 Fig. Evolution of coupling individual market areas to the SIDC mechanism.
In addition to the integration of the Day-Ahead and Intra-Day Market segments, PSE is also actively working on the integration of balancing markets in Europe, as required by Commission Regulation (EU) 2017/2195 of 23 November 2017 establishing a guideline on electricity balancing (hereinafter: EBGL). The EBGL regulation provides for the integration of the European balancing market through the implementation of four platforms:
PSE actively participates in all implementation projects of European balancing platforms. As part of our work at ENTSO-E, we participate in the preparation of the detailed methodologies required by the EBGL Regulation. As of February 2020, our organization is operationally active in the IGCC project. Joining the TERRE platform is planned for January 2022, and to the MARI and PICASSO platforms for January 2023. 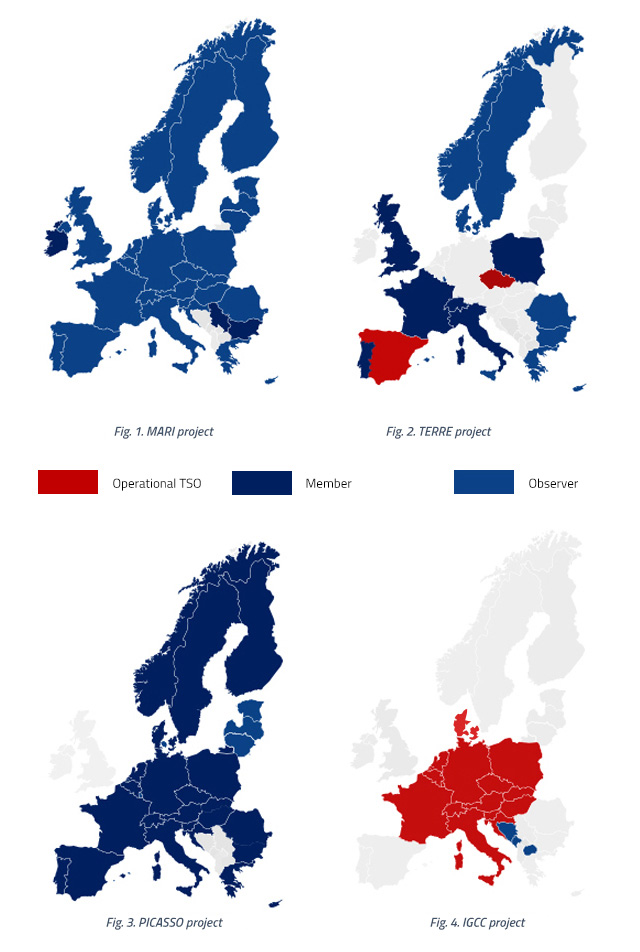 Implementation of activities under the TSC/TSCNET initiative
We are actively working with European operators under the TSO Security Cooperation (TSC) initiative. TSC members include 14 operators from Central Europe. The goal of the initiative is to enhance the operational security of the interconnected power systems in the region, including the NPS, by intensifying regional inter-operator cooperation, which currently includes processes for identifying risks and applying appropriate inter-operator countermeasures.

We are a shareholder of TSCNET. We have a representative in the General Meeting and in the Supervisory Board of TSCNET, which currently consists of 5 members. Several PSE representatives are involved in the implementation of activities resulting from the tasks of the TSC decision-making and working structures.
Synchronization of the Baltic States' systems
PSE is actively involved in the process of extending the synchronous system of Continental Europe (CE) with the systems of the Baltic states (BS). In October 2018, the Plenary Meeting of the European Network of Transmission System Operators Regional Group Continental Europe (ENTSO-E RGCE Plenary) agreed to launch the relevant extension procedure. At the same time, it set up a working group to coordinate the process, headed by a representative of PSE.

In May 2019, the agreement specifying the conditions for the future synchronous connection of the BS system to the CE system entered into force. The agreement contains a so-called set of requirements, which is a list of detailed technical conditions required to be implemented by TSOs with BSs to ensure secure operation of the systems after synchronization. One of the main infrastructural elements included in the set is the Poland-Lithuania DC submarine link (Harmony Link). In 2021, a number of studies were launched to prepare systems and BS TSOs for synchronization. PSE is the leader of the TSO Consortium established to perform this work.

In December 2019, PSE and LITGRID received €10 million in funding from the EU's Connecting Europe Facility (CEF ) for activities carried out as part of the preparatory phase of this project.

In December 2020, PSE and the BS TSOs signed a grant agreement with the EU's Innovation and Networks Executive Agency (INEA) awarding €719.7 million in funding for Phase II synchronization projects, including €492.5 million for Harmony Link's implementation phase. In May 2021, PSE and LITGRID made positive investment decisions, thus the project moved from the preparation phase to the implementation phase. In July 2021, PSE announced a tender, through competitive dialog, for the selection of a contractor for converter stations in Poland and Lithuania. In August 2021, LITGRID launched a tender to select the HVDC cable contractor.

Currently, BS systems operate under the IPS/UPS system, which geographically covers areas of the former Soviet Union Republics. The synchronization of the BS systems with the CE, scheduled for 2025, is part of the European Energy Union concept and an example of solidarity in the area of energy security. The implementation of the project is critical to completing the integration and increasing the scope of connecting BS system markets to the European system. This is confirmed by the roadmap implementing the synchronization project signed in June 2019 by the President of the European Commission and the Prime Ministers and Presidents of Poland, Lithuania, Latvia and Estonia.
Synchronization of the systems of Ukraine and Moldova
PSE is also involved in a project to expand the system of Continental Europe to include the systems of Ukraine and Moldova. We are a member of the TSO Consortium established to perform additional studies and work to align the technical operating standards of these systems, as well as to comply with applicable EC regulations on running the system operation and market rules. The PSE representative chairs a working group responsible for performing system dynamic analyses.